PHP Zeitgeist 2010: What PHP developers have been looking for in the last year?

PHP Zeitgeist is an initiative similar to Google Zeitgeist for presenting information about what PHP developers have been looking for in the latest times.

The PHP Zeitgeist 2010 edition was just published. This article presents an analysis about PHP developers search trends during 2010.

How does it work?

2010 was a great year for PHP. Now it is time to present the trends on PHP developer interests that emerged during 2010.

Since last year, the PHPClasses site started publishing trends about what PHP developers have been looking for in this site. This is an initiative that is repeated every year. It is similar to Google Zeitgeist, except that instead of analyzing Google user searches, it analyzes searches done by PHP developers on this site.

Despite, the PHPClasses site users are just a portion of the whole PHP community, given the large audience of this site and the depth of topics covered by its content, it is fair to assume that what PHP developers have been looking for in this site is about the same as what PHP developers have been looking for around the Internet. That is why this initiative is called PHP Zeitgeist.

How does it work?

The PHPClasses site keeps track of the search keywords used by its users to find content of their interest in the site.

Every year the site computes a ranking of the top searched keywords. Then it compares with the previous year ranking to see which keywords have raised significantly.

The ranking of the most noticeable raising keywords published in the PHP Zeitgeist page. It appears in the form of listing of keywords, as well in the form of a tag cloud.

The tag cloud is a feature that was planned to be introduced after the launch of PHP Zeitgeist last year. It certainly gives a nice visual touch to the ranking. Now it is easier to see which are the more relevant emerging keywords. 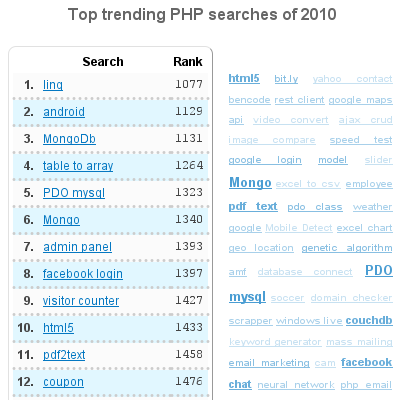 The range of topics covered by the top emerging keywords is broad. It is probably not useful to discuss here all the topics that emerged this year. However, there are a few sets of keywords that we can group by related topic. Lets analyze the most relevant emerging topics of 2010.

NoSQL databases are not exactly new, but 2010 was the year when NoSQL databases seemed to became more interesting to PHP developers that started using them in real world projects.

PHP Zeitgeist 2010 clearly shows that trend. NoSQL databases like MongoDB and CouchDB now appear in the most searched keywords ranking.

As you may be aware, Android is a mobile platform developed by a consortium lead by Google which includes many of the most important mobile phone vendors.

This year Android solidified its position as one of the top smartphone plaforms, with many hundreds of thousands of new Android devices being activated worldwide every day.

PHP can serve pages and other type of content to Android phones but probably the most unexpected development of the year concerning PHP and Android is the launch of the PHP for Android project. The project was launched last July. Then the lead developer of the project gave a nice interview about PHP for Android to the PHPClasses site.

The goal of PHP for Android is to allow developing native Android applications in PHP. Since native mobile phone applications is not the strongest vocation of PHP, we have not yet seen many PHP applications for Android. But the project keeps going strong and will eventually gain further visibility as the Android platform gets even stronger.

Facebook continues to raise great interest among PHP developers. The range of possibilities opened by Facebook API is wide. Integrating PHP applications with Facebook authentication and other applications, such as Facebook chat, are some of Facebook related topics that have raised more interest in 2010.

HTML 5 is yet another topic that continued to raise greater interest from PHP developers during also 2010. Browsers have been implementing more and more HTML 5 related features and PHP developers are really interested to learn how to take advantage of such features. That is evident by the raise of interest on topics like video, geo-location, among others.

LINQ is a framework and a language with a SQL-like syntax to query data structures. It was created in 2007 by Microsoft. Despite there are other similar projects for PHP, Tufan Baris YILDIRIM published a PHP implementation of LINQ early in 2010.

This is probably the single most relevant topic that emerged on 2010 PHP Zeitgeist trends. This seems to show that PHP developers are very interested in ways to simplify the query of their application data sources.

PHP Zeitgeist is a very interesting initiative that not only may satisfy your curiosity about what PHP developers have been looking for during 2010, but it may as well serve as a tool to identify trends about needs in the PHP community that are yet unfulfilled.

For instance, if you are looking for ideas on what innovative components you could develop to participate in the PHP Programming Innovation Award, looking at the PHP Zeitgeist ranking may get you an idea of some of the topics that need innovative components to address the related problems.

Anyway, this article is just one possible analysis of what PHP developers have been looking for during 2010. Looking at the PHP Zeitgeist 2010 rankings you may reach other conclusions. If you see other trends or you would interpret the available data in a different way, feel free to post a comment to this article with your thoughts.

No comments were submitted yet.

1. PHPClasses.org: PHP Zeitgeist 2010: What PHP developers have been looking for in the last year? (2011-01-04 10:02)
On the PHPClasses.org blog there’s a new post sharing their own PHP Zeitgeist of the terms that were of most interest to their visitors in 2010...